Posted by roodonfood on March 7, 2012 in Snacks

The Greek Yogurt trend is one I can get behind. Every week there seems to be a new company selling their version, even Yoplait (which I don’t recommend). Ben and Jerry’s (Vermont) is even debuting 4 Frozen Greek Yogurt flavors. I can say with some pride that New York has become something of a regional powerhouse for this popular treat as well,  discussed at length recently in the New York Times. 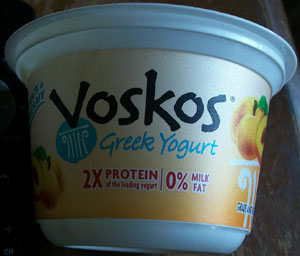 Voskos is from an area called Sun Valley, CA

Anytime Greek Yogurt is on sale at my local grocery store, I buy multiples. Recently, a new brand to me, called Voskos was on sale for $0.75, 25-50% cheaper than all of the others in the Greek Yogurt category. I bought three types, Vanilla Bean, Peach and “Exotic Fig.” I’ve been on the Greek beat since my doctor commented that Greek yogurts are better because they have higher protein content and less sugar. True to form, the Voskos package points out the higher protein content.

The Vanilla bean flavor came through nicely. If you’ve never had Greek yogurt before it’s a good test subject. Since Greek Yogurt is strained, it’s thicker. Voskos gives you a good sample of that. If you’re used to other yogurts, you might find this so thick it gives you pause. I really like the thickness. One odd thing I noticed was that it tasted less sugary than other Greeks. Strangely, the Vanilla Bean flavor has 16g of sugar, fairly high for this type.

The peach was a little disappointing. The peach flavor lingers a little longer than you’d like and comes across as acidic. Because it adds a crunch and is less expensive than granola, I like to add rice crispies to yogurt. In this case I added the nice Gluten Free Brown Rice Crispies. They worked nicely with vanilla bean. With the peach however, the crunch wasn’t enough to mitigate the acidity of peach.

So far I’ve just tried the Vanilla Bean and Peach, because frankly I’m a little scared to try “exotic fig.” I’ll update once I get brave.