Posted by roodonfood on April 8, 2012 in Food Adventures

I took a college buddy to Coney Island and down the boardwalk to Brighton Beach recently. I’ve gotten food to go several times in Brighton Beach but was never bold enough to try a sit down place. Places such as the National looked so ostentatious I assumed every place would be too high end. Bolstered by the presence of this open-minded friend I finally tried one called Primorski.

The inside is fairly dark and feels very much like a lounge. It’s packed with tables and has a small stage.  There are large pictures of old fishing vessels evenly spaced on the wall. Primorski means “near the sea.” The dining area, while windowless had it’s doors open and felt comfortable. Going in for lunch at 12pm, we were a little sheepish because there were no other customers.

The waiter though was very friendly and spoke decent English. After long deliberations because everything sounded amazing we opted for quite a few things. First as appetizers we got an order of lavash, an extremly fluffy bread with butter. Secondly, we ordered the cold appetizer, beef tongue, which was a new for me. It was fairly tasty but honestly reminded me a lot of regular roast beef. Thirdly, we got the khachapuri, a square filo dough based pastry with cheese inside. It was amazing. As I think of it now I’m having a Pavlovian reaction. 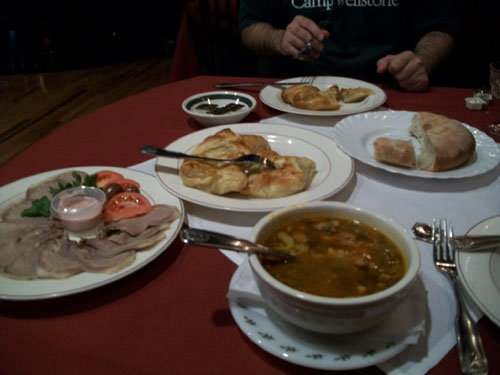 As part of the lunch special ($6.99), the Kharcho Lamb Soup was perfect for a breezy day. It had pleasant sour taste and had bits of rice, lamb, and celery. As my main course I tried the Goulash with a side of Kasha. The goulash was delicious though my complaint is that the only vegetable was carrots. My friend got the Chicken Kiev which was a generous portion alongside with eggplant wrapped with walnuts. 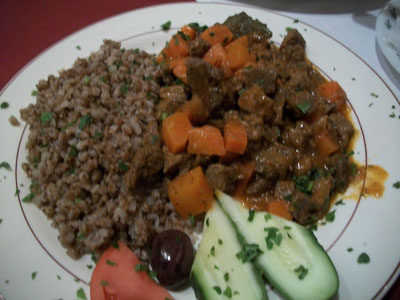 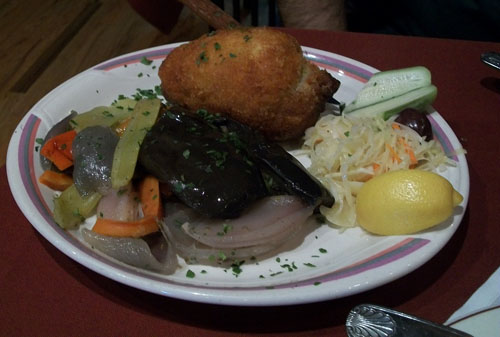 As a first visit to a Brighton Beach restaurant  I was really, really happy. We waited for a long time for our food but it was worth it. The waiter was very attentive. We learned that Primorski is 30 years old. At the end he suggested we come back in the evening for the singing of songs in Russian, Polish, and English. I’ll be really excited to go back.