Double Yolk Eggs: Work of the Devil or Great Value?

Posted by roodonfood on June 28, 2012 in Uncategorized 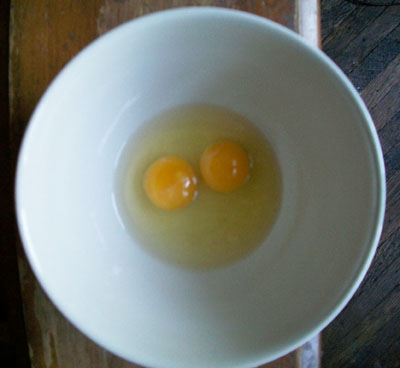 I got my first “double yolk” today. It came from the usual half dozen eggs from Wood Homestead Farms at the local Greenmarket at Grand Army Plaza. Nothing stuck out about the individual egg except the shell was slightly larger than the others. It was a little worrisome I’ll admit. Was there something wrong with the chicken? Is this going to kill me? Due diligence was in order. Before cooking it the interwebz told me that double yolks are totally fine and occur at a frequency of 1 out of every 1000 eggs so they’re relatively common.

Double-yolk eggs occur when ovulation occurs too rapidly, or when one yolk becomes joined with another yolk. These eggs may be the result of a young hen’s reproductive cycle not yet being synchronized.Some hybrid breeds of hens also produce double-yolk eggs by default. Such eggs are produced in India. Eastern states known for that are West Bengal and Andhra Pradesh.

Apparently there are some superstitions both good (marriage, financial windfall) or bad (portends death). Per Snopes.com, one old belief says that:

Once an egg is consumed, its shell must be broken up lest a witch use it to gain power over the person who ate from it. A witch might also make a boat from an intact shell, then set sail in it and wreck ships in the sea.

I read the snopes legend after the fact. Hopefully under the weight of other trash the shell was successfully crushed otherwise I fear for ships on the nearby coast. The omelette I  cooked was delicious and at 2 for the price of 1 yolk, not a bad value. Perhaps the luckiest egg buyer ever is this lady who found 2 double yolks in one carton, an odds of a trillion to one.