Posted by roodonfood on January 2, 2013 in gluten free, Recipes, vegan

For many Americans, especially Southerners, good luck meals on New Year’s Day are customary. A quintessential meal is called Hoppin John. Comprised of black eyed peas, rice and ham hock or bacon, it’s a satisfying meal. Peas are eaten because they symbolize coins. Alongside are often collard greens because of their resemblance to currency. RoodonFood collard recipe can be found here. Vegans and Vegetarians need not be left out however as the alternate take is fantastic. Ingredients, and Vegetarian/Non-Veg Methods are featured below. Note that the last 3 ingredients are for non-veg version only.  Kielbasy isn’t traditional but it adds a lot.

The first written recipe for Hoppin John appeared in 1847 in a book called The Carolina Housewife by Sarah Rutledge. The dish name itself doesn’t have a clear origin. Per Linda Stradley at What’s Cooking America, there are several possibilities:

Most food historians generally agree that Hoppin John is an American dish with African/French/Caribbean roots. There are many tales or legends that explain how Hoppin’ John got its name:

It was the custom for children to gather in the dining room as the dish was brought forth and hop around the table before sitting down to eat.
A man named John came “a-hoppin” when his wife took the dish from the stove.
An obscure South Carolina custom was inviting a guest to eat by saying, “Hop in, John”
The dish goes back at least as far as 1841, when, according to tradition, it was hawked in the streets of Charleston, South Carolina by a crippled black man who was know as Hoppin’ John. [Source]

*In Louisiana parlance it’s referred to as the “holy trinity.” 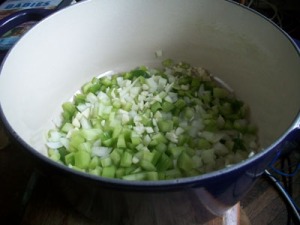 Add in rice and toast for a minute or two, stirring constantly. Finally add in all other ingredients and 2 to 2.5 cups of water depending on the rice used. Bring to a simmer then down to medium low. Cover with lid. 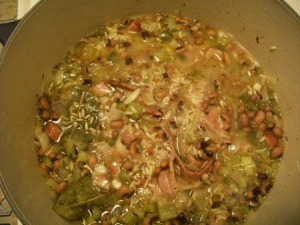 Some versions of hoppin john substitute veg broth but with holy trinity I don’t think it’s necessary since you’re essentially creating your own stock. Eat alongside collard greens or some type of leafy green for extra luck. 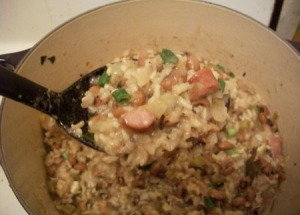 Happy New Years. May it bring you much luck.

Add butter and a little oil to a pot. Turn to medium-low. Throw in onion, garlic, bay leaves, celery, bell pepper, kielbasy and bacon into a pot. Cook until onions begin to turn translucent, and bacon begins to crisp slightly. Add in rice and toast for a minute or two. Finally add in all other ingredients and 2 to 2.5 cups of chicken stock depending on the type of rice used. Bring to a simmer then down to medium low. Cover with lid. Cook for around 30 minutes. Stirring occasionally. Eat alongside collard greens or some type of leafy green for extra luck.