Milan’s Restaurant in Brooklyn (Slovak and Czech) Review and Interview

Posted by roodonfood on February 20, 2013 in Brooklyn, Food Adventures

Milan’s Slovak & Czech restaurant is located in the growing South Slope part of Brooklyn. The only such place in the borough, it’s owned and operated by a couple, Milan and Flavka, who just celebrated the restaurant’s 16th anniversary.

Before finally trying it I’d walked by countless times, casting surreptitious glances. Slovak food was totally unfamiliar. Adding to the mystery was the fact that the curtains were always drawn. It’s hard to see just how welcoming it is until stepping inside. The main dinning area features checkered tablecloths and a green and white motif. Hockey jerseys and pictures of Milan smiling with Slovak and Czech celebrities adorn the walls. It feels like an unpretentious, labor of love.

Milan’s is a comfort food of sorts. This is the place to go for hearty potato pancakes, homemade pasta and meat and potatoes. I’ve enjoyed everything from the restaurant but a few recommendations include bravcove pecene (roast pork, sauerkraut goulash and dumplings), Madarsky goulash (Hungarian goulash), and most recently the behehradsky bravcovy rezen (pork chops breaded in potato batter). The restaurant also features some vegetarian friendly items such as potato pancakes which are quite good. Milan, the co-owner and his niece, Denisa were nice enough to speak with me about the restaurant:

RoodonFood (R): How long has your restaurant been open? How did you choose South Park Slope / Greenwood?
Milan (M): We started in 1996. We opened in Park Slope because they have a large Slovak and Czech population.

R: How big is the percentage of central European customers?
M: We have a good mix of Polish, Slovak, Czech, Russian and even American customers.

R: What is your most popular item?
M: The combination since you get to try several items: Potato Pancake, Goulash, Slovak Pasta with Sheep’s Milk Cheese. Or the behehradsky bravcovy rezen (pork chops breaded in potato batter).

R:You’re a husband and wife duo (Flavka). What is it like working with family?
M: Yes. My wife is a professional chef so she does all the cooking!

R: How has your cuisine changed over the years?
M: We’ve kept it traditional. Everything is made fresh here.

R: What are some of your vegetarian options?
M: Potato pancakes, pirogs, and pasta. We also have various salads and a special vegetarian menu.

R:What is your favorite dish?
M: The Slovak pasta, pirogs, potato pancakes. This type of pasta I’ve been eating since I was knee-high.

R: What would you like to say to anyone who hasn’t been to your restaurant?
M: People say it’s big plates of deliciousness. Try it. You’ll like it. 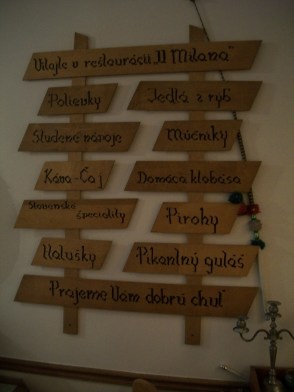 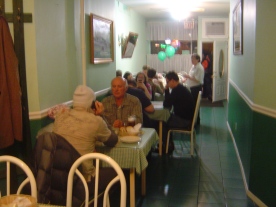