Hot cross buns are one of the most popular baked goods associated with Easter. The buns generally look like slider rolls but bear a cross of frosting on top symbolizing the crucifixion. Depending on the bakery they’ll contain raisins or other dried fruit inside and the dough is sometimes made with cinnamon. Other times, there is no filling just the frosting on top.

I wanted to check out the versions of hot cross buns at two South Slope bakeries:

Leske’s Bakery: 588 5th Avenue (Between 16th St and Prospect Avenue)
http://www.leskesbakery.com/
The Leske’s version was $1.75. It’s certainly more visually attractive than Lopez. The hot cross bun is wide with a nice sugar glaze on top. It’s studded with dried fruit inside – the kind found in fruit cakes. The texture is a little dry so coffee on the side helped.

Boulangerie Lopez: 647 5th Avenue (Between 18th St and 19th St)
http://www.laboulangerielopez.com/
The Boulangerie Lopez hot cross bun has the tiniest bit of frosting on top. The texture is moister than Leske. Oddly it seems to be made of whole wheat with cinnamon mixed in. On the plus side it was only $1.

Overall, I’m a little disappointed in both since their other products are usually quite good. This isn’t the speciality for either bakery. Lopez is a Mexican Bakery and Leske has Scandinavian roots. No clear winner in this match up. I’ll post again after trying items they’re better known for.

What are your favorite Easter items? Have you tried anything from these bakeries? 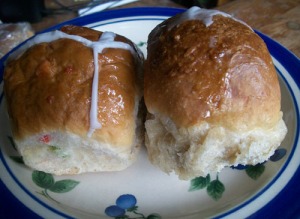