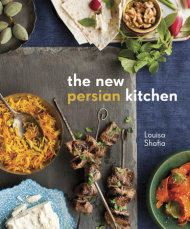 If you’re like me, you know next to nothing about Persian cooking. Thinking of Iran, maybe politics crosses the mind, but certainly no reference points about food. Louisa Shafia aims to bridges this gap in her lovingly written book, the New Persian Kitchen. The country’s cooking she explains is partial to sweet and sour tastes incorporating ingredients like pomegranates, limes and sumac. The 80 recipes featured are her spin on many traditional dishes like Fesenjen (p.109) along with new creations. It’s an unusually vegetarian and gluten free friendly cookbook too. The meat section even provides notes on how to vegify each recipe.

Louisa Shafia has been featured in Epicurious, the New York Times, and the Wall Street Journal among other outlets. She runs a health and eco-conscious company called Lucid Food and even catered the Colbert Report. Additionally, she helped open up a cafe in New York called Cafe Nadery featuring items from the cookbook. After the interview check out the recipe for Sweet and Smoky Beet Burgers. Despite her busy schedule she took the time to answer some questions for Roodonfood (Please stop by tomorrow for part 2 of the Interview and another recipe):

When many people think of Middle Eastern Foods they may think of falafel, hummus or kebabs. How is Persian cuisine different?

Iran is technically a “Middle Eastern” country, but only part of it borders on the Arabic world. It also shares borders with Pakistan, Turkey, Afghanistan, and the post-Soviet states of Armenia, Azerbaijan, Georgia, and Turkmenistan. Because of its position neighboring Central Asia—and its placement in the middle of the age-old trade routes known as the Silk Road, the link between Europe and the Far East—Iran has a really surprising and diverse cuisine. Yes, you’ll find ingredients and dishes like lentils, chickpeas, and dates, kebabs, and flatbread, just like you’ll find in Arabic and Israeli cooking. But in Iran you also have smoked fish, wild duck, caviar, pickles, sweet-and-sour stews made with meat and tart fruit, noodle soup, fine white rice studded with nuts and fruit, yogurt mixed with shallots, mint, or red beets, and all manner of green herbs, from dill to basil to fenugreek leaves. There are also distinct seasonings that give Persian food its bedazzled, quirky character like saffron, dried limes, rose petals, turmeric, sumac, sour grape essence, angelica powder, pomegranate molasses, and sour golden plums. It’s important to remember that Iran has historically been a bridge between East and West, so for Westerners who taste it for the first time, it really defies expectations because it’s so dramatically different from what we think of as Middle Eastern food.

What would you say is a good first dish from New Persian Kitchen for someone interested in trying it for the first time?

I’d recommend the Turmeric Chicken with Sumac and Lime (p. 103). For vegetarians, you can use portobello mushrooms or tofu in place of the chicken. It’s not a traditional Persian dish, but it gives you all the flavorful intensity of a slow-cooked Persian stew, but with just a handful of ingredients and a very short cooking time. It features turmeric, sour sumac and lime juice, and lots of garlic, all very characteristic of Persian cooking. Pair it with a simple side of Yogurt with Shallots (p. 36), Tomato and Cucumber Salad (p. 59), and Saffron Rice (p. 123).

Many RoodonFooders are, like you, meat eaters but emphasize the importance of produce. (I’m super excited to try the beet veggie burger recipe which is naturally gluten free as well). What are some of the stand out vegetarian or vegan dishes you’d recommend?

Because the ancient Iranians figured out a way to bring the melted snow water from the surrounding mountains into the country’s vast stretches of desert, Iran has always been known for lush, striking garden oases. In these gardens, all manner of fruits, vegetables, and herbs are grown, and fresh produce is incorporated into every dish. Traditionally, a small amount of meat was used for flavoring, while vegetables played a starring role. The Shahnameh, the Iranian Book of Kings, recounts the ancient history of Iran in mythical form. According to the story, the ancient Iranians were vegetarians who were seduced by an evil outsider to eat animal flesh. For this reason, Persian food is rich territory for vegetarians to explore.

Because I’m mostly vegetarian, I included a vegetarian option for virtually every meat recipe in the book. Aside from the Sweet and Smoky Beet Burger (p. 79), which has been really popular, I’m a big fan of all the dishes in the Vegetable and Egg Entrées, chapter, particularly the Herb Frittata with Walnuts and Rose Petals (p. 71), the Stuffed Artichokes with Mint Oil (p. 73), the Tempeh Kebabs with Minty Cilantro-Lime Sauce (p. 80), and the Potato Cakes with Tamarind Sauce (p. 81). I also like the Eggplant and Tomato Stew with Pomegranate Molasses (p. 107), and the Green Herb and Kidney Bean Stew (p. 115) in the Main Dish Stews and Casseroles chapter.

Slice the onion to a thickness of 1/4 inch. In a medium skillet, sauté the onion in the oil over medium-high heat for 10 to 15 minutes, until it starts to darken and caramelize. Turn down the heat slightly and add the beets along with the garlic, walnuts, raisins, and paprika, and cook for 10 minutes, stirring often. Transfer the contents of the skillet to a food processor and pulse several times until chunky. In a large bowl, combine the onion mixture with the lentils, 2 teaspoons salt, and 1 teaspoon pepper. Replace the food processor without washing and add the rice and egg, and pulse to form a coarse puree. Add the rice mixture to the onion-lentil mixture and mix well with your hands.

Lightly oil your hands and divide the dough into 8 portions. Shape each portion into a patty just under 1 inch thick.

Heat a heavy-bottomed skillet over medium-high heat and add oil to coat the bottom. Place the burgers in the skillet and cook undisturbed for 5 minutes. Gently flip the burgers and turn down the heat to low. Cover and cook for 10 minutes, until the burgers have a firm, brown crust. Serve hot with your favorite condiments.