Gastronomic Voyeurism: Get Paid to Have Others Watch You Eat

Posted by roodonfood on February 9, 2014 in Pop Culture

Does it sound thrilling to get paid $9,000 per month to have people watch you eat food online? As with anything on the internet, there is a market for that. It’s called “gastronomic voyeurism.” According to Reuters, at least 3,500 of these internet shows stream in South Korea. 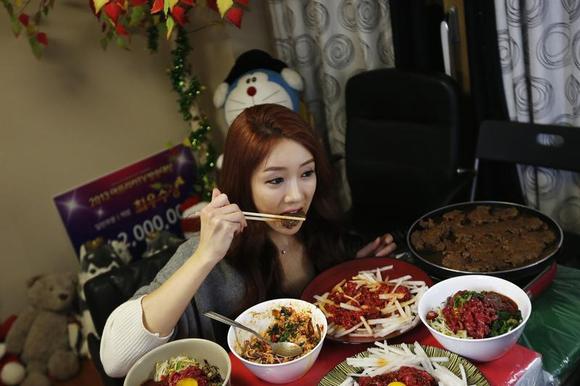 In the picture is Park Seo-Yeon who makes around $9,000/month for 3 hours of eating on camera while chatting with viewers. Individual users pay her the equivalent of 9 cents each. “People enjoy the vicarious pleasure when they can’t eat this much or find that food at night or are on a diet.”

Part of the growing popularity is due to loneliness.

One-person households are set to increase from 25.3 percent of the total in 2012 to 32.7 percent in 2030, the fastest rate in the rich countries that make up the Organisation for Economic Co-operation and Development, research papers show.

Yeon was able to quit her day job at a consulting firm to be a full time, online eater. Additionally, South Korea has one of the fastest internet connectivities in the world which makes streaming anything incredibly easy. Would you consider doing this?

9 comments on “Gastronomic Voyeurism: Get Paid to Have Others Watch You Eat”