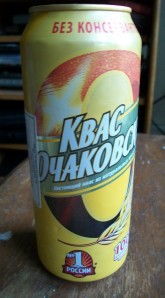 From Russia with Rye

I’ve wanted to try kvass, a Russian bread flavored soda for months since reading about it in Elliott Holt’s engrossing book You Are One of Them. The story is about two best friends in DC growing up during the Cold War. As tensions grow between the two countries, the young girls write letters to the governments asking them not to go to war. One of them years later works for an ad agency in Russian just after the fall of Communism. Brands like Coca-Cola are looking to break into the market. The author goes on to say that soda was becoming more popular displacing traditional beverages like kvass.

The word kvass actually means yeast. It dates back until at least the Middle Ages. It’s a low alcohol (1% or less) naturally fermented drink featuring rye, wheat or barley or a combination. Occasionally fruits are added. The brand I purchased, Ochokovo is all natural with a short list of ingredients: water, sugar, rye flour, barley and yeast. Poured into a mug, it forms a thin head and is a dark brown color, not unlike Coke. The first few sips tasted very carbonated. Oddly, after breathing for a moment it became more palatable. I wouldn’t guess “bread” or “rye” flavored per se. It actually reminds me more of a somewhat sweet prune-soda. The kvass was enjoyable though definitely an acquired taste. Because it’s a little heavy, it’s best by itself rather than with a meal.

Tags: brighton beach, brooklyn, elliott holt, kvass, russian food, you are one of them Permalink