Posted by roodonfood on April 8, 2015 in Uncategorized

Yours truly celebrated a birthday recently. Being a nerd, you know what that means – time to hit up the museums. This year we decided to check out the National Museum of the American Indian and the African Burial Ground.

After a delicious bacon and spinach omelette and home fries we hopped on the train. It’s very liberating taking a weekday off while everyone else is gearing up for work. It was a chilly day and felt even more so since the destinations were by the water in lower Manhattan.

Usually eye candy doesn’t catch my eye but it did this time. Look how cutely all the candy is packed up. The Twizzlers practically appeared in my hands. The National Museum of the American Indian is located in the stately Alexander Hamilton Customs house at 1 Bowling Green. A sister location to the Smithsonian’s museum down in D.C, it’s probably about 1/4th of the building. Other occupants include the National Archives and somewhat dubiously, U.S Bankruptcy Court. 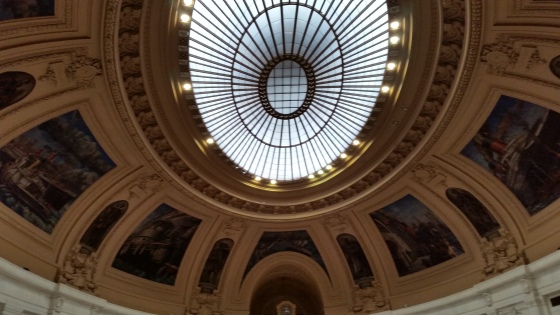 The museum is free which is a big plus. It houses some beautiful ceremonial, cultural and household items ranging from peace pipes to masks to weapons. One of the most interesting pieces was the last image in the slide show, the scissor dance.

After the museum we needed to warm up. Momentarily we were tempted by the prospect of margaritas but the cold talked us out of it. We found a place to get cappuccinos and took a few minutes. It was about a 10 minute walk over to the African Burial Ground located at 290 Broadway. Also free, this small museum gives a brief history of the African population that was based in NYC in the late 1600s onwards. Construction had begun in 1991 when workers uncovered hundreds of graves and skeletons. Researching, they realized this was once an African Burial Ground. The city rallied, and rather than building a new building, the land was given to the National Park Service. There is now a proper memorial there for the estimated 15 thousand bodies.

It was a dream like day. It even started to snow a little. For lunch we walked over to Chinatown. These guys sell 20 mini-cakes for a $1 over on Canal street. They taste just like angel food cake.

The cool looking griddle used to make the mini cakes.

Piping hot off the griddle, these were a fun cheap treat.

We spotted a bakery off Hester St. Congee, a traditional rice porridge for only $2? Yes, that sounds correct. It was a bit of a wait but delicious in it’s simplicity. Rice, Chicken brother, garlic and a bit of hot sauce. We then walked over to the legendary Punjabi Deli to pickup a classic 1,2,3 (chickpeas, spinach and dal) and samosa chaat to go. It was a nice day in the city made all the better for being so affordable.