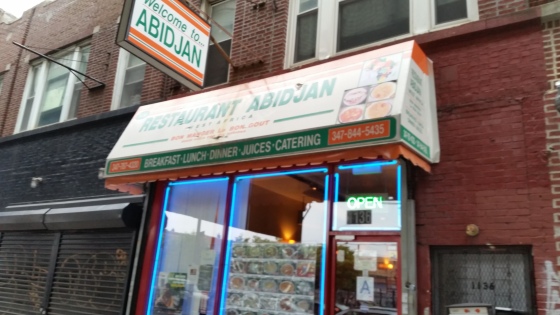 New York City is home to a large West African population, most famously Little Ghana in the Bronx. Since I live nowhere near the Bronx, I did some searching and discovered several restaurants in Brooklyn. Abidjan, is located on an unassuming block under the elevated J line, next to an appliance repair shop.

Stepping inside the restaurant though, it was quiet and cool. The restaurant owner seemed almost confused by my presence. After perusing the menu, he seemed to warm up after I recognized a few items like attieke couscous. The menu features pictures of every item – extremely helpful for those unfamiliar with the cuisine. There are options featuring “sauces” including peanut, palm, chicken and others. There are also platters with fish, chicken and lamb. Being a fan of okra, I went with the “okra sauce.” Against my better judgment I got the foutou (also known as fufu).

Both the husband and wife stepped into the kitchen for a good twenty minutes before emerging with a steaming bowl of okra sauce and the fufu. Now, I’ve read about fufu before. It’s made from ingredients such as plantains, cassava potato and or yams which are then mashed down and form a stick paste. Having never tried it, I didn’t know what to expect. It came in the form of a massive dumpling. Sticky to the touch, I tentatively tore off a piece and tried it by itself. It requires a bit of chewing. The texture is not unlike mochi but without the sweet aftertaste. It was also very sticky. 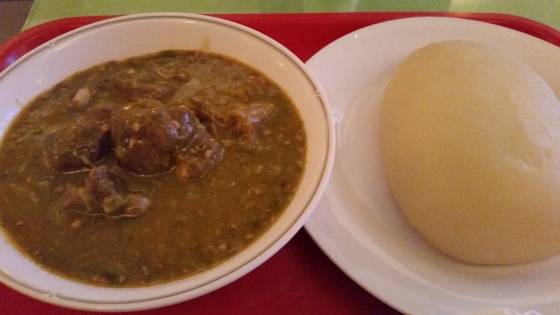 The okra on the other hand was delicious. While it’s described as a sauce, it’s more like a stew and also had some pieces of beef in it as well. It was totally cooked down, and had the slimy texture that okra fans are okay with but non-okkies wouldn’t be into. It was seasoned lightly with salt, pepper and garlic. Very tasty in its simplicity. Eating the foutou with the okra didn’t make the carb much better.

I don’t like to waste food, but when finishing the meal, about half the dumpling was left on my plate (as opposed to finished bowl of okra). Without anything to compare it to, I can’t say how this place compares with others. It was a unique experience. I will absolutely go back but next time, I’ll try out attieke.