Posted by roodonfood on March 10, 2017 in Uncategorized 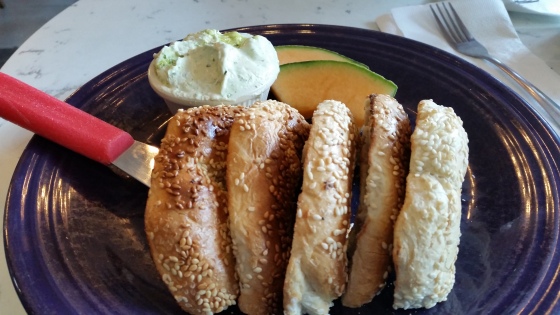 Years ago, I had a roommate from Quebec who spoke highly of his home city of Montreal. When complementing New York City he would say things like “New York is almost as cool as Montreal” which in his book was high praise. I’ve read similar things about the way Montreal views its bagels. Recently, we got to sample the holed treats up north. New York bagels are known for being large, doughy and chewy with a modest hole in the middle. Cream cheese and lox are common additions.

In Montreal they do it slightly different. They boil their bagels in honey-laced water to impart some sweetness. Baking in wood fire ovens imparts a bit of crunch. They are a bit smaller and denser in texture then Gotham’s bagels. We checked out the most famous shop called St. Viateur which as luck would have it, had no line at all. Eating it in-house they offer options like cream cheese, and the new-to-me pesto cream cheese. Sliced into five pieces, they provided a little fruit too on the side.

I enjoyed the chewiness of the bagel and the honey does come through. The pesto cream cheese though was the star. I make forth a motion that this same type of cream cheese should be available at bagel shops in the States as well. The bagel though wasn’t quite as satisfying as what I’m used to. Then again, I think they view them as snacks rather than breakfast. Montreal’s bagels are a respectable cousin in my book. Anyone from Montreal or familiar with it have suggestions for places to try? How do you like to eat your bagels if you’re come Canada? 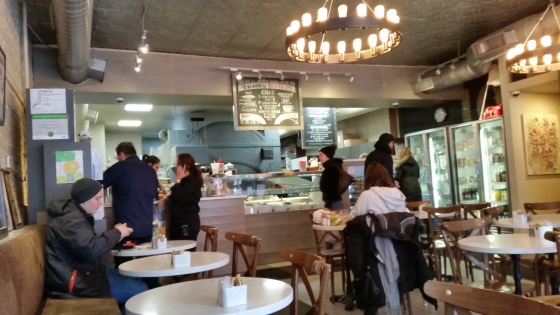