Posted by roodonfood on September 26, 2012 in Beer and Wine Reviews 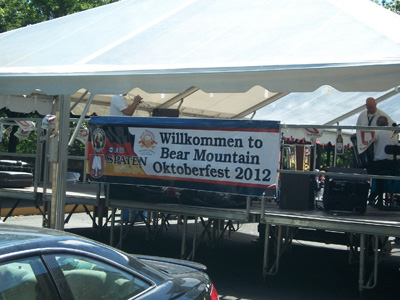 I recently attended the Oktoberfest at Bear Mountain State Park. Aside from the possibility of delicious beers and German sausage I had no preconceptions of Oktoberfest celebrations. A site called Goldstar offered a cruise direct to Bear Mountain at a discount rate of around $20 roundtrip. The deal by the way is still going on. The prices range from $15-$30 roundtrip depending on date and time. We met at 8:30am at Pier 83 on 42nd and 12th Avenue where the ship was docked.

Circle Line the famous tour boat company operated the cruise and provided fun facts along the way via speaker system. The ride itself took about 2 hours. It was a beautiful day though a light jacket proved necessary. I didn’t see the point of getting a drink on board itself but beer, wine and snacks were available.

Circle Line Docked at Bear Mountain: Whatever you do, don’t go to the zoo.

We docked at 12pm and took the correct path after the captain told us that the other way would lead…..long pause…to the zoo. He reiterated avoiding this undesirable location about 6 times. Did the captain have something to hide? Perhaps something insidious or a childhood trauma at the bear habitat? Maybe it’s not just monkeys they keep in cages? Sorry I’ve been watching a lot of horror movies lately.  Really though he mentioned it because there wouldn’t be time to catch both the zoo and the Oktoberfest. (The boat docks for 3 hours). The path to the festival grounds is probably around a ½ mile with most of it uphill so keep that in mind if you’re out of shape. 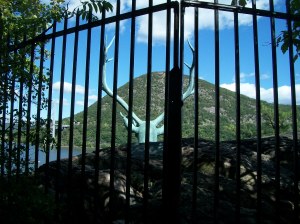 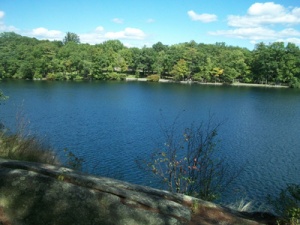 Bear Mountain State Park is beautiful. You’re immediately surrounded by lovely mountains. On getting to the festival grounds several vendors greet you including local honey and snack vendors and of course, for some reason a guy selling shirts with wolves on them. Not soon after the vendors, the visitor gets the first of a couple of opportunities for truckside (taps built into the side) beer. The beers were all from Spaten. They included a lager, a dark beer, and an Oktoberfest. They also sell a couple types of wine. They had several sizes include 16oz, 32oz and for $25, giant steins. 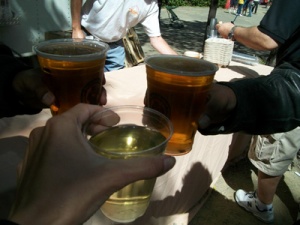 The main area is a pavilion in which vendors were selling some very elaborate ornamental beer steins, locally roasted coffees and delicious smelling Belgian waffles.  In the center a band played traditional German and not so traditional music (read: songs in Spanish). 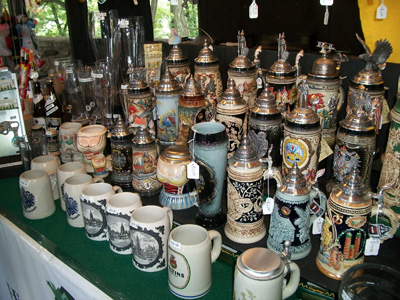 Food for sale ($3-$8) included knockwurst, bratwurst, German potato salad, pierorgies, and goulash. I’d read that the lines are out of control. That certainly wasn’t the case for our visit. They however seem to be panicking by the sudden, modest line. They started to put certain foods out for self-serve and others you had to order. Truthfully it wasn’t really a big deal as the wait was modest. We tried the aforementioned foods and were generally underwhelmed. The sausages while tasty were on oversized buns and were lukewarm in the middle. The goulash was rich in a thick reddish sauce.  The beers however were not surprisingly a highlight. Of note is the Oktoberfest which was just hoppy enough with a nice mild sweet aftertaste. 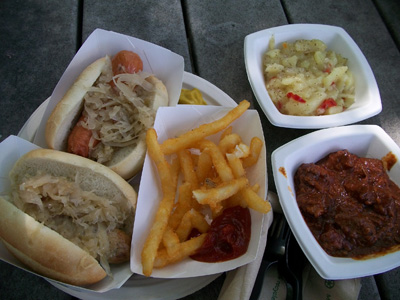 The fest is set alongside Hessian Lake a small but pristine body of water.  It’s possible to rent a boat to ride on the lake or take various trails around the park. We took a quick lap around and were rewarded with nice vantage points of the park. Additionally they have a resort and ski slopes for later in the year. The Oktoberfest is worth checking out for the scenery and for the beer. Feel free to pack your own food though.